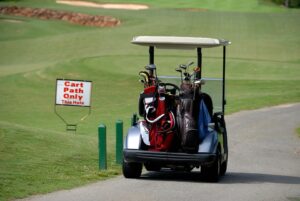 According to the New Jersey Appellate Division, whether a man was negligent in permitting his 82-year-old father-in-law to drive a golf cart resulting in an accident is a question to be decided by a jury.  In a recent case, the Appellate Division reversed summary judgment for the man who rented the golf cart, holding that a triable issue of fact existed as to whether he was negligent in letting an incompetent person operate the vehicle.

In that case, the defendant, Philip Capavanni (Philip), rented a golf cart at Beaver Brook Country Club. He was golfing that day with his father-in-law, Brian Robinson (Brian), who was a resident of Scotland and 82 years old at the time. Philip allowed Brian to drive the golf cart, which resulted in a crash that pinned the plaintiff, Thomas McKeown (Thomas) against his own golf cart, severely injuring his leg. Brian claimed that a rangefinder had fallen and gotten stuck under the brake pedal, which prevented him from being able to stop the cart and caused the crash. It was unclear whether Brian had ever driven a golf cart before.

Thomas sued Philip, among others, for negligence––alleging that it was negligent for him to allow Brian to drive the golf cart. The trial court granted summary judgment on this claim for Philip, holding, as a matter of law, that it was not negligent for Philip to entrust Brian with driving the rented cart. The trial court mainly reasoned that the liability Philip incurred when he signed the rental contract was limited because the agreement was a contract of adhesion and was meant to protect against injury to the cart as opposed to injury to others. The Appellate Division, however, reversed for several reasons.

First, the Appellate Division held that, regardless of the contract, all persons owe a common law duty of care to refrain from entrusting vehicles to negligent operators. This alone was a question that needed to be decided by a jury. While this duty exists apart from the contract, the Appellate Division also held that the contract itself did not warrant summary judgment either: it was not presented to Philip on a take-it-or-leave-it basis and it was not reasonable to assume that, as a matter of law, it was only intended to protect against injury to the cart, as opposed to injury to others resulting from negligent operation.

Second, the Appellate Division held that it was not unforeseeable that a rangefinder may fall and become lodged under the brake pedal, making the cart impossible to stop. While the trial court held that this broke the foreseeable chain of events that Philip had a duty to avoid, the Appellate Division held that this was a fact-sensitive inquiry, and fact-finding in cases like this are to be done by a jury. The Appellate Division also noted that, at the summary judgment stage, factual inferences are to be viewed in a light most favorable to a plaintiff. As a result, summary judgment for the defendant, Philip, was improperly granted.

If you sustained injuries as the result of the negligent operation of a vehicle, or have questions about personal injury cases in general, feel free to contact Ward, Shindle & Hall.