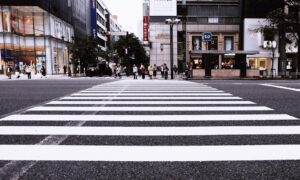 Employees who cross public highways while walking to and from commuter lots may not be covered by New Jersey workers’ compensation laws in the event of an injury, even if the employer leases parking spaces in that lot. In a case recently decided by the New Jersey Appellate Court, Jersey Medical Center/RWJ Barnabas Health (RWJ) prevailed on a motion to dismiss a claim for workers’ compensation benefits by employee Emily Manuel (Emily) after she was hit by a car while crossing a public street on her way to a commuter lot.

Emily began working for RWJ, in 2004. Since 2010, however, she has not been able to park within RWJ’s hospital grounds where she works. Instead, RWJ offered employees the option to park in a lot across the street, the Marina Lot, where RWJ rented 158 parking spaces. Employees could walk from the lot by using a public crosswalk to cross Jersey Avenue or use a shuttle provided by RWJ. Employees who wished to park in the Marina Lot could fill out an application, and RWJ would make biweekly payroll deductions from those employees in order to pay for the leased spaces. If employees chose not to park in the Marina Lot, they could also park on the street, in another lot owned by RWJ, or in the hospital’s visitor section, which required a fee. Emily chose to park in the Marina Lot, and after completing a shift at 7 p.m., was struck by a car while crossing Jersey Avenue. The impact threw her several feet and caused her to sustain hip and pelvic fractures, a concussion, and other injuries.

The workers’ compensation judge ruled that Emily’s injuries were not compensable because, the garage owners (and not RWJ) maintained primary control over the garage, the injury occurred on a public street, and because Emily could have used the shuttle instead of crossing Jersey Avenue. The appellate court affirmed this decision, reasoning that the decision by the workers’ compensation judge was both entitled to “substantial deference” and supported by credible facts.

Under New Jersey law, employees have a right to workers’ compensation benefits “if they were acting in the course of their employment at the time the injury occurred.” Generally, if the employee is on the employer’s premises when the injury occurs, s/he may be entitled to compensation. This usually depends on where the “situs” of the accident is, and whether the employer had control over that property. The appellate court held that, because RWJ lacked control over both the crosswalk where Emily was injured and the Marina Lot, her injury was not compensable. RWJ lacked control because it did not require employees to park there, retained no benefit from them parking there, and provided a shuttle to avoid the crosswalk altogether. In addition, the crosswalk was on a public highway, not on RWJ’s property.

While Emily was not entitled to compensation in this case, there are several factors that need to be explored to determine if an employer has control over the area where an injury occurs, and these facts are unique to each case. If you were injured while walking to or from a work-related parking area, please feel free to contact Ward, Shindle & Hall to discuss whether you may be entitled to workers’ compensation benefits.