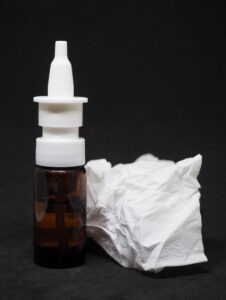 In the recent New Jersey Appellate Division case of Bove v. AkPharma, the Court prohibited an employee from suing his employer at common law for injuries allegedly sustained by testing an experimental nasal spray on himself at work.  The New Jersey Workers’ Compensation Act (“WCA”) compensates employees for injuries that occur at work.  However, the WCA also prohibits employees from pursuing common law remedies against their employer outside of workers’ compensation except in limited circumstances.  The employer’s immunity from common law claims is referred to as the “exclusivity bar.”

In Bove, the employer suggested employees test a nasal spray and document its effects, with no punishment if employees declined. The employee used the spray both during and after work hours and reported positive reviews. Bove was aware the product was not approved by the Food and Drug Administration, admitted that no one forced him to use the spray and completed a survey stating he wanted to continue receiving the spray, even after the spray’s ingredients were modified.  Bove became ill years after he stopped using the spray and claimed the spray caused his health problems.  Bove claimed his employer required him to use the spray and falsely conveyed to him that all ingredients in the spray were safe.

The Court noted these circumstances are not enough to demonstrate the employer was “substantially certain” injury or death would be suffered and that Bove’s mere allegations of battery or fraud were not enough alone to overcome the exclusivity bar.  Bove’s lack of medical evidence and admissions that he was not forced to use the spray prevented him from satisfying the “conduct” element of the standard.  The Court did not address the “context” element because Bove could not satisfy the “conduct” element.

This case is a reminder to employees that the exclusivity bar is high, and they should understand that demonstrating their employer knew with substantial certainty that their conduct would result in injury is a high burden to prove.  It also recommended you not ingest experimental and non-FDA approved chemicals at work.

If you have any questions about this case or anything related to New Jersey Workers’ Compensation law, claim please call Ward, Shindle and Hall.